​Elfie often draw en paint intuitively.
​No preconceived plan that gives her direction, because that limits her creativity. She close her eyes and her thoughts fall completely silent.
In a meditative state she let charcoal or graphite slide over her sheet.  It resonates with the deepest being in herself.
Then she open her eyes and look at what she see.
Hidden secrets are revealed.
She refine, give contrast and more shape to the image.

Then she analyze the image. The meaning can change according to the phase in her life. Sometimes it takes a year before it becomes clear what it means to her.
This is also the case with this work: HIDDEN POWER

Only now she understand that for her this is about meeting the masculine and feminine energy in herself.
The woman looks pure and powerful to her. She is looking at the man.
​
The circle that goes through the penis around the woman could indicate that the "man in her" is trying to connect with the woman but in a possessive way.
​His arm, on the other hand, makes a somewhat dismissive gesture. 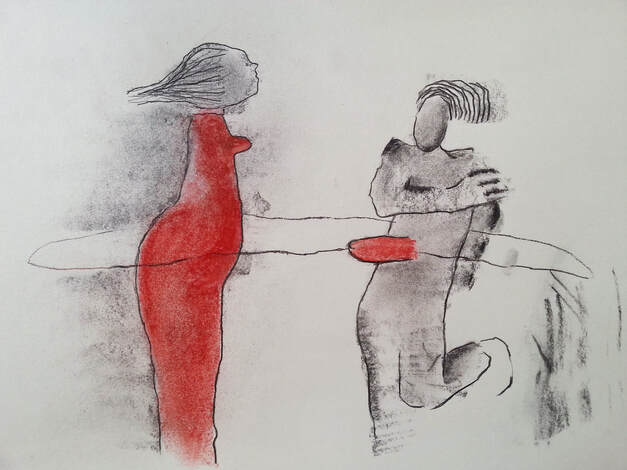 HIDDEN POWER
At the moment she is immersing herself in the "male and female energy of man".
"When both are in balance, we can establish ourselves in the world in a powerful way. But often they are out of balance. In my case they are. The male energy in me is sometimes destructive. It is sometimes negatively charged. He wants to control and dominate "the woman" in me.  As human beings, we can grow all our lives.
I love to walk that inner path where there is only room for authenticity."
The drawing can also be interpreted differently. But she leave the viewer free in that. Her images do not ask for a story. The viewer can form his own story. ​
Click here to go back to previous page