How it all started

Elfie Kristiana (°1976) is the living prove that a disease can have a white side as well as a black side.
In her early twenties and thirties, she was that "girl" who was pushing her limits again and again as if it was just a game.
She worked as a coördinator in a school, doing late evenings was no strange to her.
In the meantime she studied for creative therapist. ​She also loved sports and social life.
She was always busy.
​

Until her body literally didn't want to move forward anymore in 2009.
Her muscles "melted" away, her whole body was hurting, her organs weakened and a paralyzing fatigue chained her to her bed.

The life she had built was gone, she was "dead" to society.
Heavy treatments didn't bring any results.

​She wanted to do so much, but her body made this impossible. Trapped in her own body.
Until that day in 2011, another sofa and bed day.

She took a black pen in her hand and without thinking she filled her sketchbook with lines.
Intense scenes were created. A translation of her inner world.
A magical feeling through her body.
She saw heaven in hell and discovered the deeper meaning of "freedom".
​

She hasn't stopped drawing since then.
In 2015, a treatment was found and she slowly recovered.
Her body remains fragile and communicates loud and clear with her at times when she loses sight of herself.

Since 2015, Elfie has also been making collages, sculptures, photo essays, short films and digital photographic work.
The image is her home language, creating her air to breath.
Faithfully following her own path and standing natural in life made her a sensitive and powerful woman. 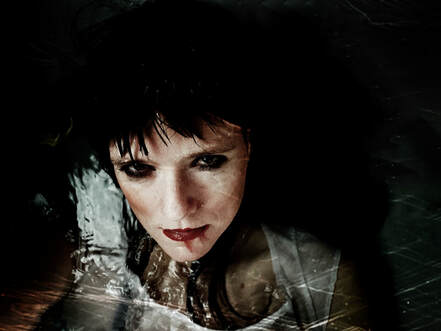 She gets her inspiration from her body and emotions, her personal growth process, but also from stories of others, nature, buildings, music, people and her environment.​
When the viewer is thouched by Elfie her artwork and the work finds it's right place, then for her the circle is complete.